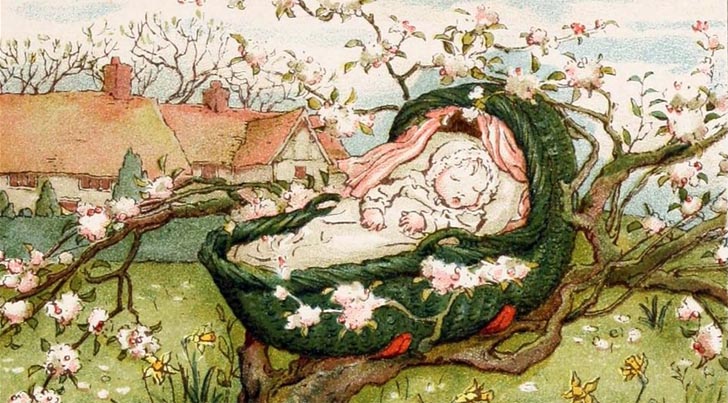 It is a little difficult to taxonomize this recording of “Rock Your Cares Away” by bandleader. It is clearly Ray Starita’s band, as is indicated on the label of the Sterno recording made at the same session (Sterno and 4 in 1 were both products of the British Homophone Company), but Ray had not returned from a vacation to America the previous summer and so could not have directed the music. The 4 in 1 record from the session mentions not Ray, but his brother Rudy Starita, the percussionist who did eventually take over control of the band from his brother. And yet Rust and Forbes think it likely that this particular session was led by Nat Star, who was generally in charge of dance music at Homophone.1

Whoever directed it, the result was a memorable piece of lively dance band music. The lyrics of “Rock Your Cares Away” exhort us to cast away gloom, live in the moment, and “…rock [our] cares away / In a cradle of dreams.” The Star/Starita 4 in 1 version is uptempo; Elsie Carlisle’s vocal refrain, while brief, is memorable for its ebullience. Her enthusiastic delivery is infectious and evocative of a carefree mental state, and she gets across the song’s message through raw energy rather than mere earnestness. “I Heard” is a novelty song written by the American musician, bandleader, and composer Don Redman.  It involves interlocutors who discuss a piece of apparently scandalous  gossip, but who cut each other off so as to leave the listener in the dark as to the real nature of the rumor.  A reference to “the birds in the spring, and the rabbits,” and the threat that “They’re gonna name it after you!” suggest a love affair with an illegitimate offspring. This 1932 British recording was made by the great American-born bandleader Ray Starita and his Ambassadors’ Band.  Elsie Carlisle plays the person who has heard the rumor, and there is a male speaker who questions her, doubts her, and eggs her on.  The latter was once thought to be Ray Starita himself, although it is now more generally supposed that it is Les Allen.

This recording of “I Heard” appears on a Four-in-One record.  As the name would suggest, Four-in-One records pushed the limits of technology by fitting two songs onto each side of the disc, the result being a bargain for the record buyer.  The downside of their concept is that the grooves are a bit narrower than usual and thus more prone to being scratched up by repeated playing.  In the same recording session, Starita and Elsie did a separate take for the Sterno label, which used the more typical one-song-per-side approach.  The Sterno recording is quite similar for the most part, but the violin solo is rather different and does not reach into such a high register.

The composer, Don Redman, recorded two versions of “I Heard” in late 1931 (here and here), and in 1933 appeared in a Betty Boop short of the same title.  In 1932 it was recorded by Harlan Lattimore and His Connie’s Inn Orchestra, as well as by Chick Bullock.  The Mills Brothers did a particularly popular 1932 version that led to their appearance singing it in the 1934 film Twenty Million Sweethearts.

In Britain in 1932, other recordings of “I Heard” were made by the Savoy Hotel Orpheans (Al Bowlly, vocalist), Billy Cotton and His Band ( Cyril Grantham, vocalist), Nat Gonella, and Harry Roy and His R.K. Olians (with vocalists Harry Roy, Bill Currie, and Ivor Moreton).

“I Can’t Get Over a Boy Like You.” Words by Harry Ruskin, music by Martin Broones.  Composed for LeMaire’s Affairs (1926). Recorded by Elsie Carlisle with the Gilt-Edged Four on February 7, 1927. Columbia 4275.

I Can’t Get Over a Boy Like You – Elsie Carlisle

This recording of Elsie Carlisle singing “I Can’t Get Over a Boy Like You” to the accompaniment of the Gilt-Edged Four is remarkable for two purely physical or material reasons. First, it is one of only four recordings that Elsie made that are meant to be played at 80 revolutions per minute, and of those only it and “Meadow Lark” were issued to the public. Columbia records were a holdout against the general tendency to standardize gramophone speeds at 78 rpm, and the company stuck to its proprietary speed of 80 rpm until late 1927. Second, these records were made using the special Columbia “New Process” of laminating cores of low-quality shellac with higher-quality compounds that reduce surface noise, and the resulting sound is impressively clear.

The Gilt-Edged Four was a Columbia studio band led by saxophonist Al Starita. This particular song features his playing and that of his brothers Ray and Rudy, with whose bands Elsie would go on to make noteworthy recordings in 1932-1933. The piano and celeste are played by Sid Bright, twin brother of bandleader Gerald Bright, better known as “Geraldo.”

The song “I Can’t Get Over a Girl Like You (Loving a Boy Like Me)” — for that is how the lyrics usually go, insofar as they are usually sung by men — originated in a revue named “LeMaire’s Affairs” (after producer Rufus LeMaire), which was quite popular when it was based in Chicago and starred Ted Lewis and Sophie Tucker. It apparently bombed after moving to Broadway when Sophie Tucker was replaced with Charlotte Greenwood. The song compares the ease with which one can “get over” all manner of ailments (e.g.”[m]easles, mumps, and whooping cough, / The flu, and housemaid’s knee…”) to the difficulty of “getting over” being the object of someone’s affections. Elsie injects upbeat, girlish fun into this catchy foxtrot and delivers its simple argument rather fetchingly.

“I Can’t Get Over a Girl Like You” was recorded in America in 1926 by Johnny Hamp’s Kentucky Serenaders (with vocals by Billy Murray), Abe Lyman and His Hotel Ambassador Orchestra, Ted Lewis and His Band, Aileen Stanley and Billy Murray, Adrian Schubert and His Salon Orchestra (with vocalist Arthur Hall), and the Arkansas Travelers (with Lem Cleg).

“Stop the Sun, Stop the Moon (My Man’s Gone)”2 is a 1932 composition by Harty Cook, Mercer Cook, and J. Russel Robinson (the latter two also produced the popular “Is I in Love? I Is” that same year). In this song, the singer makes almost Biblical demands for the powers of nature — and technology, for that matter — to cease their usual operations, for she has lost her man. This sort of theme was suited to Elsie Carlisle’s dramatic manner of delivery, and in this recording her impassioned complaint serves as a fitting summation to the pulsating instrumental interpretation of the tune by Ray Starita and His Ambassadors’ Band. They would do another take of the song that day with Elsie, and it appears on Sterno 1028.

In addition to the two record sides made by Ray Starita with Elsie Carlisle, there was a 1932 British version of “Stop the Sun, Stop the Moon” by Ambrose and His Orchestra (with vocalist Sam Browne).