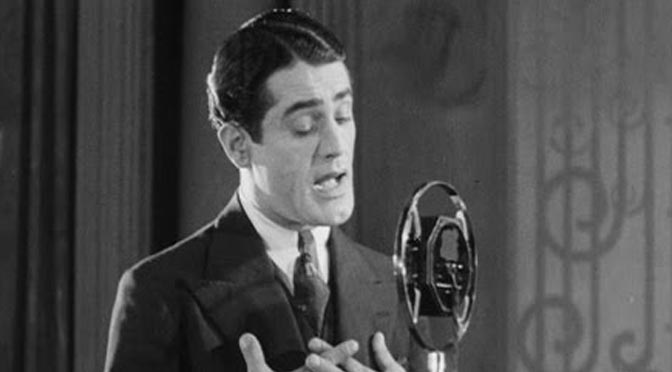 Today we remember Al Bowlly, that unique interwar singer who was perhaps unrivaled in his ability to project vocally a persona of romance and sophistication. On April 16, 1941, Bowlly returned from giving a performance in High Wycombe and stayed up late reading, in spite of an intense Luftwaffe air raid. On the morning of April 17, a German parachute mine that had fallen outside his building exploded, killing him, amongst others. Bowlly was given a funeral at a Greek Orthodox Cathedral in London and buried in Hanwell Cemetery in a mass grave for bombing victims.

Al Bowlly and Elsie Carlisle sang a duet of “My Baby Just Cares For Me” in a medley in 1932:

Al Bowlly and Elsie Carlisle – “My Baby Just Cares for Me”

From John Watt’s “Songs from the Shows” (recorded March 7, 1932. Decca K. 645). “My Baby Just Cares for Me” was composed by Walter Donaldson, with lyrics by Gus Kahn. Eddie Cantor made it famous in the film “Whoopee!”