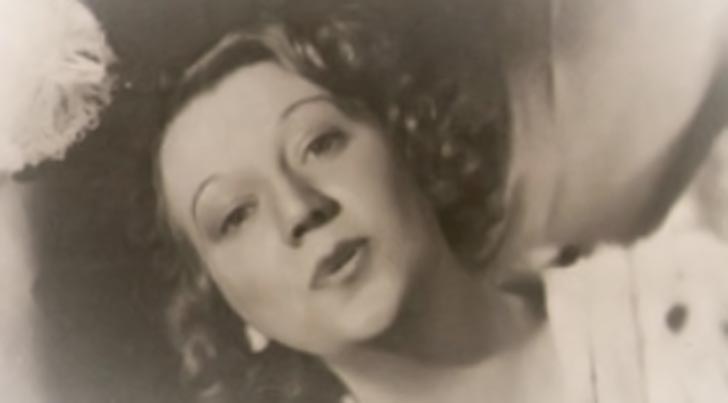 Elsie Carlisle passed from this world on September 5, 1977, dying of cancer at the age of 81 in the Royal Marsden Hospital, Chelsea, London. The informant who signed the death certificate was Wilfred “Willie” Ypres Carlisle, one of her two sons, who gave as his own address the same one that she had been living at for the previous four decades, 8 Deanery Street, in the posh Mayfair district. She is described in the document as “A Theatrical Artist (retired)” and “Widow of Wilfred Malpas.”

The era of British dance band music was long over, and she had lived in great privacy for many years. It was four days before the London Times took notice of Elsie Carlisle’s death, when they printed an abbreviated eulogy:

Elsie Carlisle, who was a notable crooner of the 1930s, has died. Born in Manchester she was an established name by the time she was 16. She appeared in many Royal Command performances, among her song title hits being “No, no, a Thousand Times, No!” and “Little Drummer Boy”. For four years she was partnered by Sam Brown [sic] but they split up in 1935.

By contrast, during the interwar years the praise showered upon Elsie’s talent and winning personality was far more effusive. In 1921, almost five years before Elsie made her first radio broadcast, she earned the following review from the Angus Evening Telegraph for her performance in a Dundee production of the play French Beans:

An ideal Cupid is Elsie Carlisle, who entertains as much with her bewitching personality as with her charming voice. She has a knack of getting to the heart of her audience, and it seemed as though she were not to be allowed to make her bow last night.

In 1926, Elsie began both to sing on the radio and to make records, and her increasingly nationally recognized celebrity attracted ever more fanciful epithets. In 1927 she was a “charming microphone personality.” By 1934 she had become “the champion mezzo-soprano crooner” and “Your Radio Favourite.” In 1936, surveys showed her to be the public’s favorite female radio singer, and she earned the oft-repeated title “Idol of the Radio,” a status she enjoyed for several years. In November 1939, Radio Pictorial famously dubbed her “Radio Sweetheart No. 1,” and in 1941, the penultimate year of her making records, the Hull Daily Mail was still calling her “the charming songstress of the radio.”

Elsie was not only known for her solo work, of course. Her name is closely associated with the elite Ambrose Orchestra (with whom she recorded the still-popular songs “The Clouds Will Soon Roll By,” “Pu-leeze! Mister Hemingway!” and “You’ve Got Me Crying Again”), but some of her best work was done with other bands, such as the Rhythm Maniacs (under the direction of Arthur Lally), Ray Starita and His Ambassadors’ Band, and Jack Harris and His Orchestra. She was also frequently paired with the singer Sam Browne, with whom she  recorded duets in the early 1930s.

In 1940-1941, nearing the end of her professional career, Elsie toured the country with a troupe of younger entertainers. The draw that her name exerted is attested by the fact that the group called itself “The Carlisle Express.” She stopped making records in 1942, but she was still  on stage and continued making broadcasts through 1945. After this point she almost completely dropped out of the public eye, but it is worth noting that that was true of most dance band personalities; the genre did not really survive the war. Her attention shifted to business ventures, including a ballroom in London and an inn in Berkshire.

It was not only for stage, broadcasting, and recording that Elsie was known; she also worked in other media. In addition to making short but amusing appearances singing in a number of films, Elsie was an early television star, appearing first on the crude Baird system in 1930, and she continued to pop up on TV as the technology improved during the 1930s. In the early 1950s, she did a television interview accompanied by Ambrose and then disappeared utterly from public view until 1973, when she appeared on the Denis Norden program Looks Familiar. She was to return to that show in 1975. 1

An erstwhile child actress who rose to striking celebrity and dominated the airwaves for nearly twenty years, Elsie Carlisle ended her days in comparative obscurity, but those who had worked with her remembered her not just as a great musical talent, but as a warm, fun, and charitable person. In the words of accompanist Bert Read, writing in the months following her death: “I shall always retain the warmest memories of a fine artiste and a gentle, compassionate, woman.  R.I.P.”